Skip to content
Skip to the content
Humanities Institute > About > News Archive > ‘Tis the Season… for Nightmares! 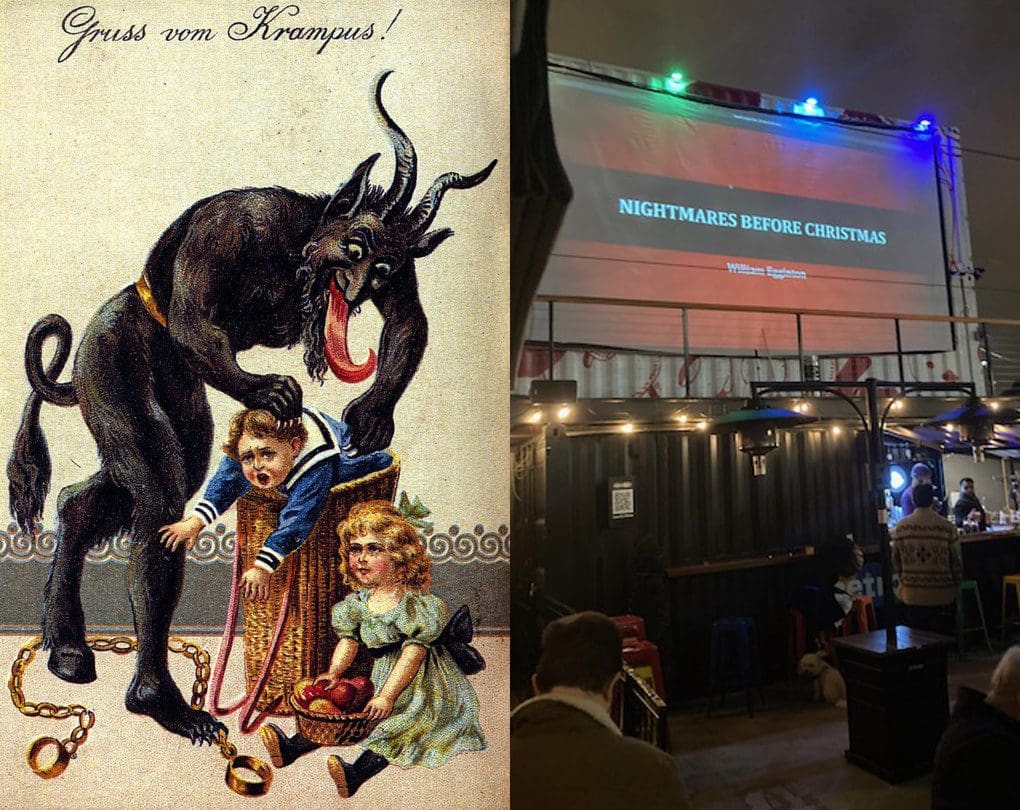 Before the close of the year sends all of JHU off for the holidays, Prof. Bill Egginton (AGHI Director) joined Profs and Pints DC on Sunday, Dec. 11th for a presentation on good ol’ Krampus and other “Nightmares Before Christmas.”

Held at Metro Bar DC, Prof. Egginton gathered attendees for a festive “a discussion of the darker lore of the holiday season—the tales that inspire us to search our own souls and worry about the price that we’ll pay for being naughty rather than nice.

“The star of the talk [was] Krampus, the hairy, horned, demon who accompanies Saint Nicholas in visiting homes in Germany, Austria, and other Central European nations on the eve of the Feast of Saint Nicholas.” (See one such image of the big baddie from a turn-of-the-century German Krampuskart, or Krampus card [above].)

As noted by Profs and Pints, “Professor Egginton, a scholar of horror in literature and popular culture, [spoke to] summon up other frightening figures and dark lore associated with the holiday season. He delve[d] into the pagan roots of Christmas as a solstice ritual and show how its early origins helped give the season a sinister side and inspire traditions such as coal in stockings. He talk[ed] about that mean one, Mister Grinch, conjure up the ghosts of Dickens, and explore the growing genre of Christmas horror films. And he [also showed] how thrilling and scary antics often associated with carnival and Halloween have their place in Christmas traditions” (P&P).

Find more of Prof. Egginton’s work on horror, media, and modernity—including his afterword, “What Are We Talking About When We Talk About Zombies?” (Zombie Talk, 2016). Check out other Profs and Pints events happening all across the country via their website.

And enjoy your holidays… if you dare.