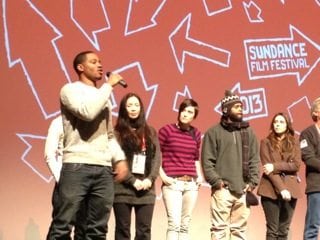 By Maria Callahan, Class of 2015 In the final weeks of January, eight Johns Hopkins Film and Media Studies students had the opportunity to attend the 2013 Sundance Film Festival. As one of these students, I thought I knew what to expect from the trip. I knew that it would be a week of getting […] 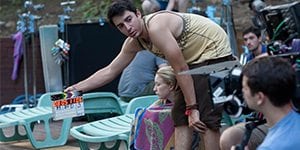 When Matthew Porterfield’s eagerly awaited film, I Used to Be Darker, debuts in early 2013, several Johns Hopkins film majors will be listed in the credits.

With over 200 film credits to her name, post production sound and scoring engineer Susan McLean is no novice. She shared what she’s learned at an October 16 event hosted by the Film & Media Studies Program. Click to read more.

Jane Miller '04's "Feedback" is the tale of Holly, who, trying to cope with the loss of her mother, spends her inheritance on a PR firm that specializes in rebranding people.
For the seventh year, in partnership with students at Morgan State University, Hopkins film students served as first readers for the Baltimore Screenwriters Competition, sponsored by the Baltimore Film Office at the Baltimore Office for Promotion & the Arts. Under the supervision of FMS Senior Lecturer Lucy Bucknell, interns evaluated and provided coverage of competition screenplays. This year’s contest winners […]

Diana Peralta, a talented, budding filmmaker studying at the university, submitted her stunning short form Intermediate Production project to the MidAtlantic Black Film Festival, and it was accepted. I recently sat down with Diana to discuss her short film, "Moleque," her experience submitting to festivals, and what inspires and motivates her as a rising young artist.

Actor James Franco attended a screening and discussion of his film The Broken Tower about the life and work of the poet Hart Crane on March 9 at Homewood’s Shriver Hall. The film was introduced by the actor and was followed by a panel discussion featuring Franco; John Irwin, Decker Professor in the Humanities and author of the recently published Hart Crane’s Poetry; and Linda DeLibero, director of the Program in Film and Media Studies.

By Abby Harri, Class of 2015 During 2012 Intersession, film and media studies majors traveled to the Sundance Film Festival. To our luck, a small group of Johns Hopkins University Film and Media Studies students were able to travel together to Park City, Utah for the 2012 Sundance Film Festival. Many have heard of the popular […]

In November 2010, Variety listed Michael Diliberti ’04 as one of “10 Screenwriters to Watch.” He was only 28 years old, but he had already worked as an assistant, executive assistant, associate producer, and executive before hanging out his own shingle as a screenwriter. In August, 30 Minutes or Less, which he co-wrote with close friend Matt Sullivan, arrived on movie screens across the country.
Ross McElwee, independent documentary filmmaker, in conjunction with the Film and Media Studies Program, hosted a screening of his most recent film, Photographic Memory, on November 18, 2011, in Hodson Hall. The film is a meditation on the world of McElwee’s youth and the now digital word of his young adult son. The screening was followed […]